Extreme acoustics in the shooting range

Imagine this scene in a Hollywood action movie: Two police officers are chasing the bad guy in an industrial area surrounded by high concrete walls. A wild gunfight ensues for several minutes. In the end, the police capture the bad guy and all walk off unhurt.

What is wrong with this scene? In reality if it had happened that way, all involved parties would be temporarily deaf and might even have suffered permanent hearing damage.

Working for a manufacturer of sound level meters, we asked ourselves how loud gunfire really is. To find out we got in touch with the owner of a local indoor shooting range.

The „RMS Shooting Anstalt“ in Schaan, Liechtenstein, operates a state-of-the-art shooting range in the border triangle region of Germany, Austria and Switzerland. Besides recreational use and competitions, security personnel often use this facility for professional training sessions.

Business owner Carmelo Accardi designed this high-tech shooting range in combination with a public restaurant. They are located in the center of an industrial area in Schaan, surrounded by a number of companies. The excellent sound insulation and the powerful air ventilation as well as the state-of-the-art technical equipment are the most important features of this facility. An electronic system allows dynamic training sessions for stationary and moving targets. Mr. Accardi is also the local contact person, who is responsible for safety and procedures at the shooting range and manages the entire operation. The RMS shooting range was founded by Horst Marxer, of the RMS Security Company in Schaan. 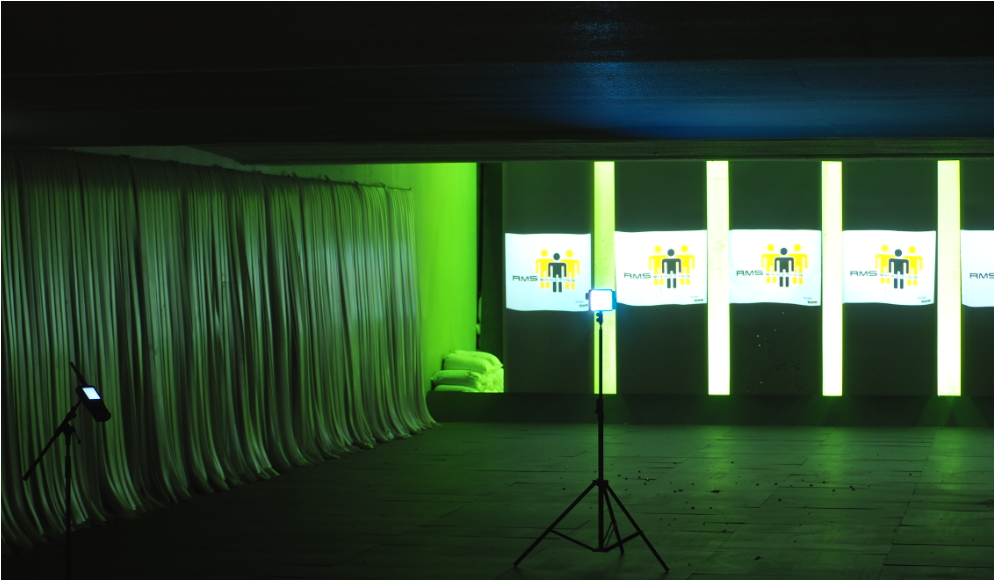 As we had exclusive access to the facility, we not only measured the shooting noise, but also the room acoustics. A low reverberation time is desired for shooting ranges.

Measuring the reverberation time
What is the ideal reverberation time in an indoor shooting range? The noise level is even high before shooting, as the powerful air ventilation contributes significantly to the background noise.

We therefore evaluated the reverberation time with and without active air ventilation. Those measurements were performed with a DS3 dodecahedron, omni-directional loudspeaker. For this, the DS3 was placed in the center of the room, between the shooter’s position and the target in order to get the full noise distribution throughout the room.

The background noise of the room without active air ventilation is 54.1 dB. This was measured with an XL2 Sound Level Meter at a distance of 4 meters to the DS3 loudspeaker. The DS3 dodecahedron in use provides 121 dB ref 1pW of sound energy. 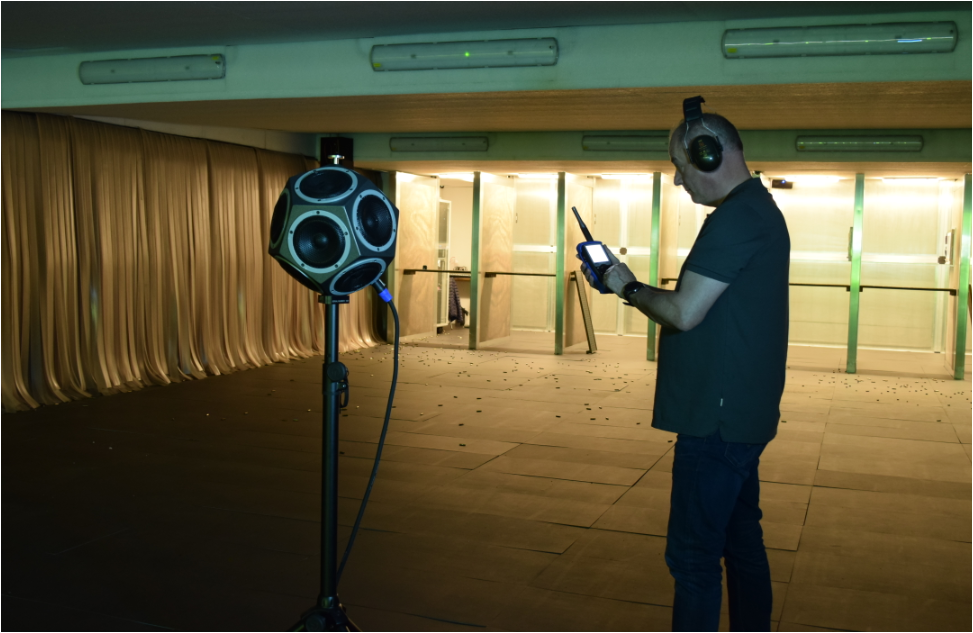 We also wanted to find out whether the laminar airflow of the ventilation system has significant influence on any of the acoustic parameters. Therefore, we performed all our measurements with and without active air ventilation system.

Measuring the reverberation time with no air ventilation (red curve) was plain sailing. After turning on the air ventilation (pink curve), the reverberation time at low frequencies seems to be lower. However, this is most likely caused by an increased measurement uncertainty, since the laminar airflow significantly increased the low frequency background noise.

So, how loud is shooting noise really?
During initial orientation measurements, we found that a microphone position next to the shooter, even with a low sensitivity microphone, caused a solid over-range condition on the sound level meter. Therefore, we chose a position at a 30° angle and 2.5m distance to the shooter. This was the closest microphone position that did not lead to an over-range peak level of 154.1 dB or higher.

When projecting that number to a distance of 0.7m (ear to pistol), the peak level at the ear reaches 165.2 dB. At this level, the unprotected ear would be most likely be permanently damaged by a blast trauma. 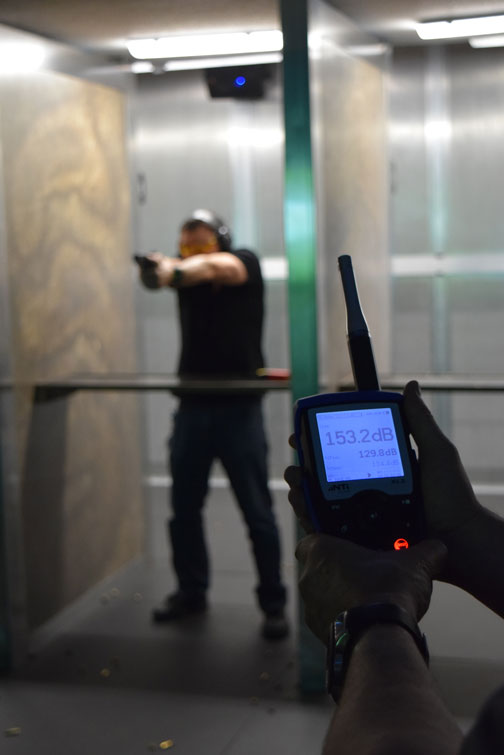 Sound level measurement at a distance of 2.5m

The same series of shots was measured simultaneously with a second device at a distance of 8.5m. At this position, the peak level LCpkMax still reached 143.8 dB.

We were aware of the fact that for a standard-compliant measurement of very short-term impulses one should ideally measure with higher sampling rates of 192kHz (as specified in the US MIL-STD 1474E). Nevertheless, in this measurement application the existing sampling rate of 48kHz of the Sound Level Meter allowed for a sufficient measurement and repeatable accuracy due to the spectral energy distribution of our measured shots. If the sampling of the XL2 was not sufficient, we would have seen large variances of the LCpkMax. We could then only conclude that the actual value was at least as high as our highest measurement with the Sound Level Meter.

The same series of six shots at a distance of 8.5m

When projecting these measurement results to our initial action movie scene, it becomes highly likely that all participants would suffer from a hearing damage after the first shot, no matter who fired first.

We also investigated whether the peak level changes with active air ventilation. The graph below shows that the background noise between the shots rises. The peak level however was not influenced. 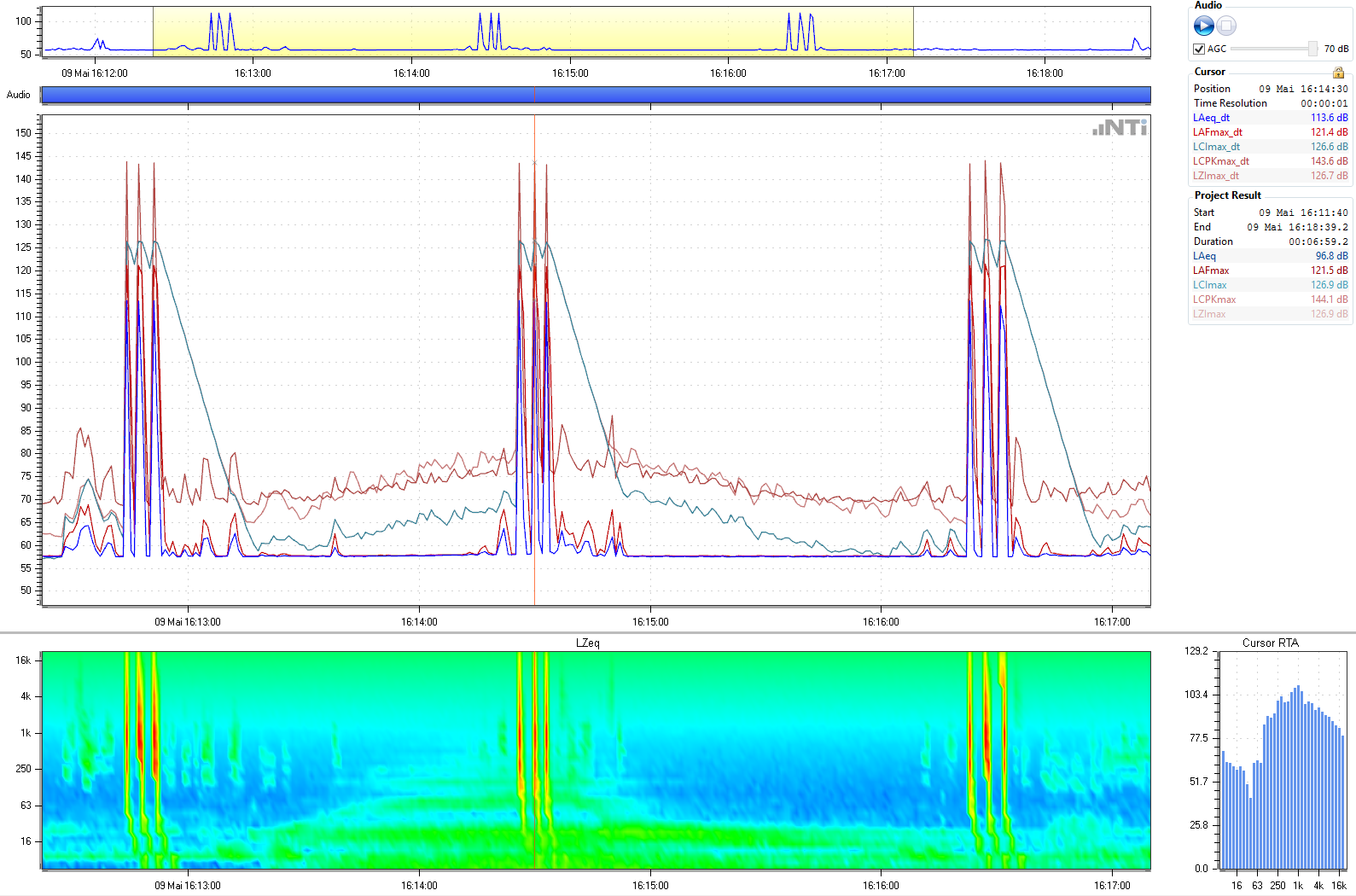 Shooting sequence without / with / without air ventilation

The main energy of a shot lays at frequencies above 1 kHz. Assuming a realistic attenuation of 35 dB, the peak level at the shooter’s ears still reach 130 dB.  For extra sensitive people or those who shoot frequently, it is recommended to combine the hearing protection with an extra earplug or earmold.

A public restaurant is located in the space next to the shooting range. Therefore, it was interesting to investigate the sound insulation of the shooting noise.

Based on the short-term Leq, the door to the vestibule attenuates 44 dB, and in the restaurant area, the noise is attenuated by 80 dB. At an attenuated level of 65 dB, the shots are barely audible when air-condition and background music are off. The sound insulation measures are highly effective.

Perfect ambience
The measured reverberation time and sound insulation values confirm that the eye picks up in the room. The acoustic conditions are as pleasant and functional as the rest of the shooting range. Generally, there are no reference values for shooting ranges. “We already took great care about the acoustics in the planning phase. The interior and materials were selected to get not only perfect functional conditions, but also for providing a comfortable ambience for our shooters“, says Pasquale Carmelo Accardi, director of RMS Shooting and responsible for safety and operation. “It is my top priority that our customers get the best possible and individually arranged training at our facilities. That is only possible when everyone feels safe and comfortable“.

What is the correct term for Reverberation Time?

Maybe you have also stumbled over different terms that referred to reverberation time. For instance, you may encounter the abbreviations “RT”, “RT60”, “RT20” and “RT30” – but which of them is the right one?…